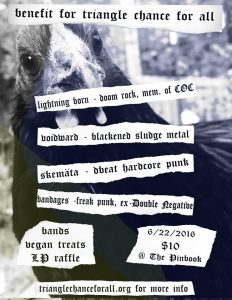 It’s been a bit of time that I’ve done a write-up on the shows I’ve filmed or photograph. Luckily last night I didn’t film too much and was able to catch all the the bands (unfortunately didn’t get to film Voidward) and can write a bit about it and the event. I’ve volunteered at Triangle Chance For All a number of times, which is an all vegan farm microsanctuary. What is a microsanctuary you ask? Its basically the thought that you could start a sanctuary out of the space you own or rent, hence the micro, and TCA itself is a microsanctuary, but is maybe a mega-microsanctuary. Most of us don’t live in rural settings where we would have as much space, but TCA has two huge pigs, a dozen or more roosters/hens, two wonderful ducks, and a number of dogs and cats that don’t exist as the actual sanctuary but are a part of Justin and Rosemary’s daily life. The thought of the place is a living instance that we can save animals, not just dogs and cats…. we can all have rescue chickens in our back yards and not use them for their bounty and toss them away when they are spent. A bulk of the residence as well as if you visit the Carolina Tiger Rescue or Piedmont Animal Refuge, are from people who get animals with no long term intent to keep them, or their presence becomes a burden on the people so they get rid of them. Examples are cute color chickens for Easter become adult hens one day or even worse if you live in the city, roosters (most cities have a ban on roosters in city limits). So now that you know what they do (basically save farm animals, rehome them if there is no space at the sanctuary, and take care of them without taking anything from them), lets get to the music.

In my time volunteering its been more than obvious that Justin (who runs the place with his partner Rosemary) is into extreme music based on his t-shirt collection, usually pretty straight forward metal shirts. To rewind a bit, I did a benefit show in my hometown when I was sixteen or seventeen and got a charity on board. I made fliers and posted about the benefit online. I got a phonecall from the charity who said I couldn’t use their name on any advertising for the show but I could put “Benefit for (I’m going to change the cause too keep them out of it) the homeless”. Justin has a wonderful DIY focus on things and I assume its common knowledge for me to say, a narrow interest in fundraising which is obviously important to a charity. The idea of a show that Justin would enjoy and to raise some awareness for the cause with like-minded individuals, or maybe even not like-minded, would be a great thing to put together. Justin reached out to a few of the volunteers who have music interest and we (aka mainly they did the work, I tried to put together a failed raffle) put together a show. We (aka they) actually put together a show with a really good line up!

Showday! This one started a bit early. I myself had to rush through some dinner and head to Durham. Voidward killed it. Their recordings are much darker and on the black metal side but live they seemed to put forth a more Isis/Pelican sound, well if Pelican had vocals. There’s some classic rock riffs mixed in there but mainly sludgy stoner metal that is upbeat at times and the guitarist shreaded through some killer long solos. Kind of a pity they put forth such a killer set along with the guitar solos with no dead or off-notes (aka how I’d play them) because at 7ish The Pinhook was a bit sparsely populated. I didn’t film because in my peripheral there were people standing on either side of me and didn’t want my glowing LCD screen to bother anyone. Next up was a brilliant surprise. Bandages couldn’t play so last minute Salmonella jumped on and were super excited to play their first show (a month before their actual first show was going to happen). I don’t know their rhythm section but Ryan who has been in various bands on guitar, and both Nick from Drugcharge and young Ava on vocals. I can’t help but cite Nausea (not the grind band from LA but the classic punk band) as an influence because of the dueling vocals. For it being a first show, they didn’t mess up once that I could tell. I later learned the drum threw up in the middle of playing but I honestly could not tell because he kept playing without missing a beat. After that was Lightning Born, which is a new local area super group comprised of the bass player from Corrosion of Conformity, the drummer from Colossus, and the singer from The Hell No. I’m not sure if the guitar player is from another band but he was shredding on a bright white SG so that ruled. Everything was on point, Mike Dean of course was killing it on bass, and Brenna’s vocals were pretty flawless. Its not the type of music I would seek out but what they were playing was on point! Last was local Sorry State Records crust/d-beat legends Skemata. Alex left the band recently to attend father duties as he is a new father, so Kyle from Drugcharge took over and learned their entire set in a few weeks.. he definitely delivered which I’m glad of because Alex’s shoes are a lot to fill.

Overall it was a good night for music, had friends drive from Greensboro and from elsewhere. I know it was hard for a lot of people to get out on a Wednesday to an earlier show, but I heard people showed up late and donated anyway for the cause. I bought some killer cookies at the end of the show, I assume Irena made them so hats off to you. Thanks again to Sorry State for donating LPs to the cause and sorry that was a bit of a flop on the raffle side but look for those same LPs on eBay because I’m going to sell those LPs to benefit TCA despite the shortcoming at the show.

In the end it was all about helping spread the word about the important work TCA does. From being a volunteer, I’ve seen that 100% of donations go into the charity. Justin and Rosemary work jobs outside of the charity to sustain themselves and to filter into the sanctuary. If you enjoy the content below and want to help, here is a link to their donation page.